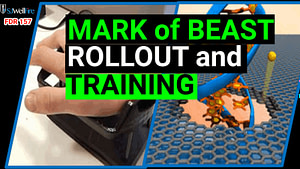 Beast System is Being Implemented by Big Companies

Sorry for the swearing on the MOB video. Black goo is everywhere with gene defilement technology. What is up with the Queen lighting up the Tree of Life or the Tree of Good and Evil. Is the triple Helix creating new life? How can the seeds of men cleave with the old Roman Empire / Vatican / Queen? Who funded many of the Tech Companies. Are the elite saying graphene will work in humans? Are tech companies being asked to join the UN? Is Master Card getting people to pay with their face? What is up with the rollout of pay with your hand.

Chat with us on Gab: https://gab.com/sjwellfire

If you appreciate our videos, please consider supporting us financially: https://sjwellfire.com/support/

.New book about what is the Fourth Beast System and how Seal One opening was key to start it. We cover new ideas about Abomination of Desolation, and who could be the Ten Kingdoms. https://www.amazon.com/Seal-Opened-Keys-Beast-KINGDOM-ebook/dp/B0B65NZH1R/ref=sr_1_2?crid=1NNH620XXMKWV&keywords=sjwellfire&qid=1658255333&sprefix=sjwellfire%2Caps%2C132&sr=8-2

Mark of Beast (MOB) Rollout is Moving Fast including 3 Helix

didn't find what you are looking for?